My diamond days are over.

Turns out diamonds are not my best friend. I was recently charged with the task of merchandising a selection of diamond rings, bangles and earrings; a fiddly job that gave me new appreciation for my opposable thumbs. Surreptitiously slipping on various rings I was unmoved by their scintillation.

Diamonds, with their glittery hard brilliance and prescriptive classification system, are precious, covetable and utterly ubiquitous.

The tennis bangle looked garish and even though the combined value of the pieces I played with was many thousands of dollars, the overall effect looked cheap. They could quite easily have hailed from one of those chains dedicated to undetectably manufactured diamonds.

I turned to the pearl cabinet and was immediately struck by their discreet lustre. Having formerly regarded pearls as the sartorial domain of the mature woman or Coco Chanel, I never considered myself either old or wraith-like enough to pull them off.

As I draped various strands about display busts and suspended pearl drop earrings onto tiny stands, I regarded each piece with contradictory fresh yet seasoned eyes – apparently I have reached the age of pearl appreciation.  Holding a necklace up to my throat I stole a look in the small counter mirror and was struck by how flattering the luminescent patina of each pearl was against my skin. Now, if I could just find some dowager to bequeath me a triple strand of Mikimoto’s before my neck is too crepey to wear anything but an artfully wound scarf or a neck brace, I’d be very happy indeed.

I’ve just realized that my husband, upon reading this, may regard it as a thinly veiled attempt to secure something precious for Christmas. Let me make it abundantly clear that I will be extremely pleased to receive whatever he….

…whatever I end up buying for myself for him to give me. This year it’s perfume.

I love the idea of inherited jewellery, of receiving something that was significant in a loved one’s own life.  When I was a teenager my stepmother would occasionally allow me to borrow a simple ruby ring that she had been given at the same age. I was told that at some point in the not too distant future, this ring would be given to me, as it no longer fitted her. One day it appeared as a permanently fixture on the finger of my stepsister. It was her birthstone and had apparently been intended for her all along.

My ex mother-in-law had a host of precious gems in an overflowing jewellery box. She regularly wore a stunning square sapphire ring surrounded by tiny diamonds. I was particularly enamoured of it and despite the fact she had four daughters of her own, secretly harboured dreams of possession

Divorcing her son guaranteed this was not to be.

Bio-mum, as she will henceforth be known for blogging purposes, who reappeared some forty years after running off with the next door neighbor, hastily shared upon meeting me again that all her “really good” jewellery had been stolen ten years ago. This break in included the theft of the engagement ring from my father.

Interestingly, this same engagement ring reappeared on her hand several months on from our conversation.

Bio-mum possesses another older and eminently more sentimental engagement ring that belonged to her grandmother. I have quite clear memories of this quintessential nanna. A diminutive woman with a tightly permed crown of white hair, she wore a strand of Austrian crystals that settled in the soft folds of her neck.

The four diamond band set in rose gold filigree had been refurbished by a jeweler relative. The day it was delivered back to her I had called in to visit. The ring sat in a plush box on the kitchen bench.

I slipped the ring onto my finger easily. It fit perfectly.

Bio-mum inhaled audibly and promptly wrenched the ring from my finger, popped it back in the box and snapped the lid shut. Marching upstairs it disappeared into some shoebox or other at the back of her cupboard far away from my obviously grasping hands.

It is with this mindset I have striven to furnish my daughters with their own sentimental favourites to eventually bequeath as they see fit. A belcher locket bracelet and small but perfect diamond pendant have the eldest off to a discerning start. The youngest currently favours friendship bands, blue howlite and rose quartz, so I will hold off on bestowing any really valuable pieces until she can appreciate them.

I ended up wearing a square sapphire after all. My betrothed furnished me with a ring the colour of ultramarine. It is without question the most beautiful thing I will ever possess and I still get a little jolt of joy whenever I look at it. 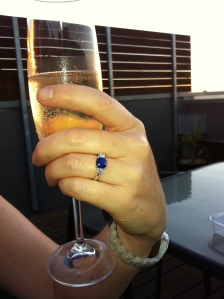 Neither child has posed the question of inheritance as yet but just quietly I think it will come down to whomever is prepared to shell out for the motorized chair when the time comes. I think that’s fair.

Jane is of the belief that her life's purpose may well be to serve as a warning to others. She is unsure as to why she speaks in the third person...
View all posts by Learning the hard way →
This entry was posted in Family, humor and tagged Christmas, Coco Chanel, Diamond, Engagement ring, Gemstone, humor, inheritance, Jewellery, Jewelry, pearls, Shopping. Bookmark the permalink.

2 Responses to My diamond days are over.