Turns out, she’s no oil painting…

She could have been the local psychopath.

Dressed, as she was, in a navy boiler suit (prison issue?) with oversized glasses and an off-centre bun, Gyda whizzed by in her (stolen?) RAV4, screeched to a halt and backed up, brusquely asking if we were locals.

Concerned she was going to have a go at our allowing Monty-the-failed-guide-dog to meander chaotically off-leash, we defensively declared ourselves to be relative neighbours and proceeded to describe exactly where we lived.

Satisfied by our residential credibility, she peered at us myopically, mused aloud that we were both likely to be gainfully employed and then, apropos of nothing, enquired whether either of us would be interested in modelling for her local painting group.

Spouse demurred, while I, perennially on the hunt for the next great anecdote, thought why the hell not? Gyda was clearly delighted at the prospect of a fresh    muse, promptly scratching around her car in search of a notepad and pen, eventually scrawling my number on a dry cleaning docket before speeding back off along the gravel road.

She had my number and knew where I lived, and, for all I knew, having just escaped a minimum security facility for post-menopausal delinquency, was also sporting an ankle monitor.

What? It could happen.

A couple of months elapsed with no word from Gyda and the prospect of finding fame amongst the local bohemian elite increasingly remote. When one day, there it was, an excruciatingly polite voice mail message reiterating the modelling request and hoping to see me the next day.

Tucked away inside the heritage rooms of a railway station, a colony of painters were setting up their easels and paints on a Tuesday afternoon. Met by a gleeful Gyda, I was led to a couple of stacked wooden palettes with a chair on top, beside a small balustraded staircase that looked to have been filched from the prop. department of a community theatre group.

It took five people twenty minutes to angle the lighting required to best illuminate my visage, with the remaining three artists arguing about their own specific shading concerns for another ten. When my hilarious light torture sight gags failed to amuse, it was clear this whole exercise wasn’t going to be nearly as fun as I’d imagined.

Arranging my features into what I considered to be a benign expression of careless loveliness, but judging by the final results, was obviously a look of distracted irritation, I began the job of power-sitting during four twenty minute blocks over three consecutive Tuesdays.

Gyda had promised a ‘small stipend’ for my efforts, which, while smacking of an Austen-esque clergyman eking out his livelihood in a small county vicarage, covered a couple of mid-range bottles of wine after each session.

Ranged in an arc before me each of the artists toiled silently away, the only sounds a thumping  and scratching of brushes on canvas. Those on the periphery had to contend with a flash of ear which apparently nobody enjoys. As a result, every so often one of them would dart forward and arrange my hair to better obscure the offending organs.

Reinhardt, a taciturn Western European, sported a high-vis vest which made him easy to locate at the outer edge of my vision. He was also unaccountably noisy, sighing theatrically and loudly packing up his equipment well before each session was officially over. Along with Morris, a reptilian looking man wearing an old-school art smock, neither chap deemed their respective finished works worthy of viewing.

Not so Barbara, whose preference for watching ‘A Current Affair’ and fear of African gangs set her apart from the remaining social progressives, and whose finished painting, belligerently  brandished at me, suggested a measure of unresolved anger. 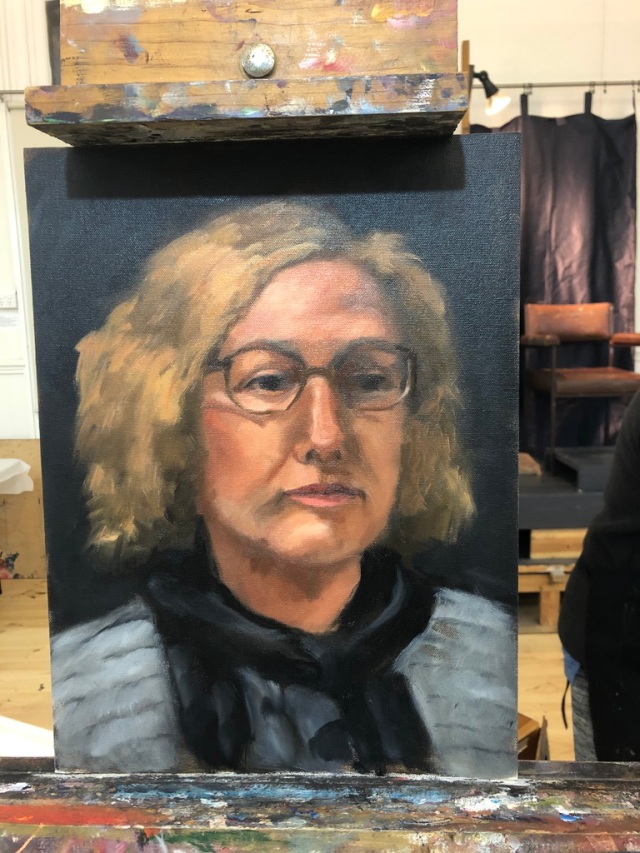 Barbara and I did not see eye to eye. For  this, I was duly punished

Anthony, a hairdresser by trade (“three years at Sassoons, darling!” ), would take regular photos of me on his smart phone which I assumed was to facilitate some out of session touch-ups. Or not. The final work, on a tiny canvas, revealed a pale and desiccated woman of around ninety, with blonde permed hair. 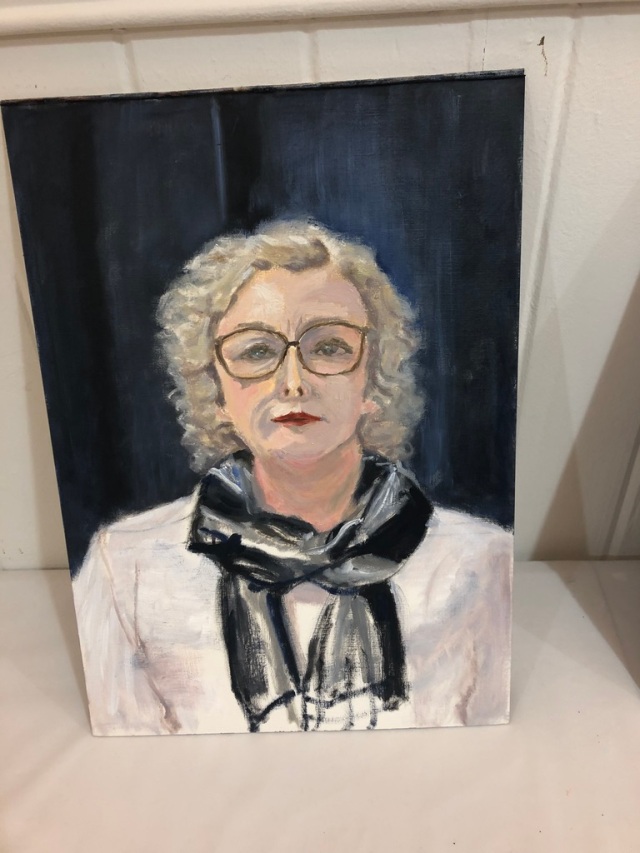 Pass my zimmer frame, I’m off to bingo.

Gyda’s working angle delivered an unsettlingly prominent double chin and heavy brows, while my nose was completely transformed by Justine, who also decided I should have brown eyes.  Susan and Rachel, standing front and centre in painting poll position, offered the most recognisable depictions, which while not necessarily flattering were at least obviously me.

So other than some mid-level leg cramping and major ego bruising, the entire project served to cement my resolve to avoid life drawing classes at all costs…

…and, more pressingly, to invest in some industrial strength skin cream as soon as humanly possible. 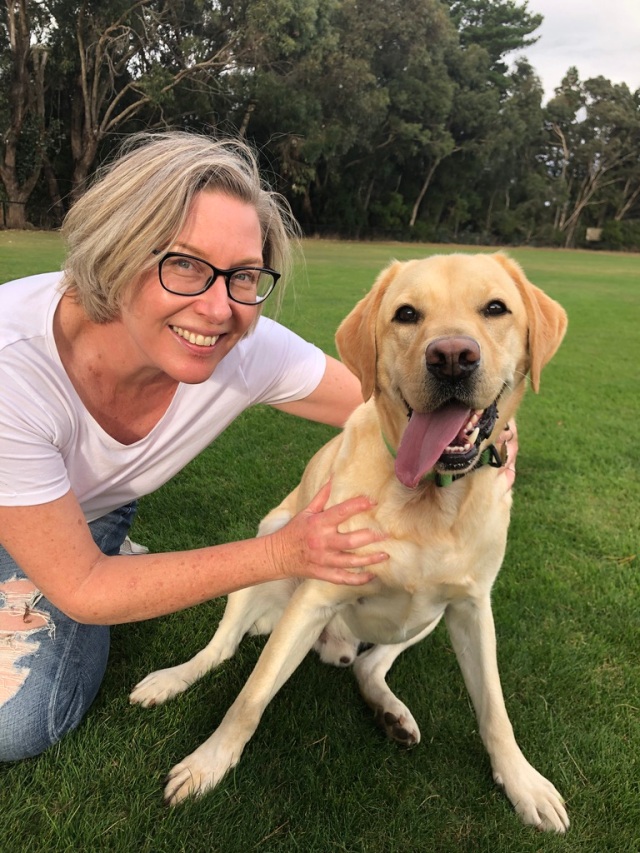 Dogs don’t care how many wrinkles you get, as long as you have treats for them. AT ALL TIMES.

Jane is of the belief that her life's purpose may well be to serve as a warning to others. She is unsure as to why she speaks in the third person...
View all posts by Learning the hard way →
This entry was posted in humor and tagged art modelling, artists, painting. Bookmark the permalink.

6 Responses to Turns out, she’s no oil painting…