I haven’t felt particularly Christmassy this year. There seems to be a combination of possible reasons for this. D2 is still blissfully happy in the backwoods of Massachusetts and making noises about the possibility of future permanent residency. D1 heads over to the UK in less than a month and has been working as many shifts as possible to ensure she can afford more than beans on toast while she’s there.  There is little regard for Christmas and its accompanying traditions.

Spouse views this time of year as nothing but hard graft. Every bar in the city is ordering treble the usual quantities and they all need their stuff NOW. He leaves home at an unconscionably early hour and returns exhausted and aching in the late afternoon. The last thing he wants to discuss is what he wants to do for Christmas – the answer of course, is sleep.

I’m privy to the very first hints of this highly commercial holiday as I careen about the suburbs for work. Some malls and department stores are extremely tasteful with a pared back festive aesthetic while others look like Christmas projectile vomited over every available surface.

Father Christmas had been getting his schmooze on from early-November. I first spied him through the tinsel entwined archway at a shopping centre in Geelong slumped in his big red chair. His photography elf has wandered off and he was adjusting something on his belt, well at least I think that’s what he was doing.

Propped at a table with a coffee happily typing an email describing Santa’s inherent lameness I became aware of someone behind me. Unable to convince any of the young mother’s with strollers to plop their toddlers onto his lap he had wandered across to press the flesh. I shook his damp gloved hand and suggested he grab a Latte and come back in December. He was thin and anaemic looking and I can’t help thinking a few weeks of carb loading and some sunshine might help.

A week later I spied him out North surrounded by ice skating penguins and dozens of rope lit palm trees. He was still quite thin but his complexion was considerably swarthier. Thousands of bud lights flashed psychedelically. His photographer had reindeer antlers and not much to do as everyone had smart phones to record their own free Christmas memories. They hadn’t thought this one through.

He was schvitzing away under the radiant heat of a gazillion Swarovski crystal ornaments out East of the city. Giant rivulets of sweat ran down his jowly florid face and kiddies were reeling away from his purchased embrace. The crying was contagious and before long there was an entire queue of progressively hysterical toddlers being cajoled by frazzled mothers and grandmothers.

Stranger danger? This fat dude with the killer hipster beard is asking me all these leading questions and offering me presents…it doesn’t get much stranger!

While Father Christmas works his festive magic from his various magic grottos grim faced shoppers clutch lists and bags and bags of stuff. Car parks become Darwinian exercises in survival. I’m saw very little of the Christian sentiment that is supposed to abound at this time and a great deal of frazzled and ill-tempered folk determinedly making it all about themselves.

Speaking of which, Bio mum came through again with another reliably thoughtless gift. I was sure after the impossibly tiny Japanese bowls and Lilliputian cheese set of the last couple of years I was in for some equally microscopic collection of specialty crockery.  This year in a clear attempt to keep me guessing she went with oversized. Along with one of those cheap wire canisters with implausibly flavoured olive oil and vinegar she went with two gigantic tea towels.

Nothing says let me eradicate the pain of missing 40 years of Christmases with my daughter like tea towels, right?

I’d gone with a book because my mother loves to read. It was a wonderful book written by a local author, set in Melbourne and critically acclaimed. She will love it.

She’d gone with tea towels for me because…?

I mean, truly, has anyone in the history of the universe ever said, “Look, I know I mentioned perfume or a DVD box set, but what I’d really adore is a couple of tea towels”?

I’m toying with employing some canny seamstress to fashion them into a pair of cheeky shorts; then I’ll photograph myself wiping dishes on my ass and frame it for her next birthday.

Her granddaughters scored a box of chocolate-coated macadamia nuts.

That’s the one box between them.

D1 wanted to know how her grandmother could possibly have known just how desperately she coveted chocolate covered macadamia nuts? I can only speculate on D2’s reaction.

Ermagard! You got me WHAT?!

Despite my lack of religious sentiment, I do enjoy a good spot of caroling. So imagine how pleased I was to learn my choir was singing a few numbers at a Church Carol night last weekend? We had already performed two concerts the week before and were high on just how gosh darn fabulous we were.

The door to the church was closed and a scrawled note instructed any interested parties to venture around the corner. There, a makeshift cardboard A-frame with “Carols Here” crayoned in the large wonky hand of a five year old with advanced motor skills, alerted me to the notion that audience expectations may not be high.

The tiny outdoor courtyard was decorated with a sad cardboard Nativity scene that looked suspiciously like the work of the aforementioned five year old and may well have been sponsored by VISY. Perhaps we could introduce them to ply wood for next year?

We were allotted a small performance area on the lawn between newly landscaped garden beds. I found myself teetering more than once into a large plant pot as we attempted some travelling choreography. Given we were closely ranged before a makeshift alter complete with flaming advent candles, there was the ever present hazard that one of us, flinging a rogue arm about, could trigger a Michael Jackson Pepsi moment.

We began with the medley from Sister Act, which, as it begins reverentially enough, seemed to meet with audience approval. However, as we happy clapped into the up-tempo section some of the more puritanical amongst the congregation were looking a bit jaundiced.

We briefly redeemed ourselves with the Lithuanian folk standard, Carol of the Bells but lost all credibility during our Monroe-esque sashaying to Santa Baby. There was genuine horror on their collective faces and I’m quite sure I lip read “work of the devil”.

We must have intuited the general vibe as the pace of our singing became increasingly accelerated, sounding at times, a good deal like Alvin and the Chipmunks. Our accompanying choreography also sped up so we appeared to be performing some type of Tap meets River dancing hybrid.

Finishing with the ubiquitous Mariah Carey’s All I want for Christmas we more or less sprinted off to a smattering of bemused applause. 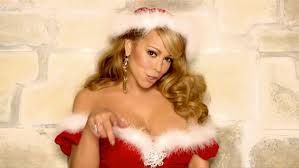 It’s entirely possible we may not be invited back next year.

But I will be. Thank you to my loyal band of readers for your comments and “Likes” (pre-facebook that would have read “approval”) I look forward to chatting at you again in 2014.

Jane is of the belief that her life's purpose may well be to serve as a warning to others. She is unsure as to why she speaks in the third person...
View all posts by Learning the hard way →
This entry was posted in Family, humor and tagged Bells, Carol of the Bells, Choir, Christmas, humor, Macadamia, Mariah Carey, Mother, santa, Santa Baby, Sister Act, Swarovski. Bookmark the permalink.