Posted on February 4, 2019 by Learning the hard way

House sitting, we’ve recently discovered, comes fraught with issues of trust and responsibility. When our beautiful local friends jetted off to Austria for a weisse Weihnachten trawling through Christmas markets and skating their way along the Eislaufverein trails, we moved into their home.

This impressive hunting lodge-meets-the-Hampton’s property situated on some 10 acres, housed two beloved dogs, three well respected alpacas, two benevolently regarded goats and two barely acknowledged sheep. Along with our own two, Monty the failed guide dog and Archie the rescue canine, it was quite the rural menagerie.

My LTHW blog audience of long-standing may recall that Christmas for me remains a time of reliable angst; with no magic, little peace and absolutely zero good will toward human-kind.

In other words, time spent with family.

Compound this with the anxiety of keeping four dogs away from several resident wombats, trying to navigate frustratingly slow Foxtel downloads and attempting to cook edible food in the truculent AGA, and it was going to take very little to tip things right over the edge.

Christmas day passed in a blur of driving, eating, drinking, exchanging gifts and familial politeness. We arrived back to a riotous cacophony of barking from all four dogs and some frantic squeals from the Alpacas. Alpacas are like natures alarm systems, when they sense danger they emit a high pitched scream to warn off intruders. They’re also supposed to handle attackers with a combination of ninja kicks and Liverpool kisses, but these three just huddled in a corner and screeched like banshees.

The object of their distress was Archie the rescue dog. Accompanied by one of their own dogs, he was wildly careening about the paddock seemingly rounding up the various beasts. We’d caught and evicted the two of them on several prior occasions, noting their obsession with bailing up the smallest goat, but figuring it to be harmless canine japery.

Now, I’ve been a suburban girl for most of my life, who, while embracing the central Victorian tree change, have nevertheless found aspects of a semi-rural kinda life challenging. Suicidal ‘roo’s, Jack jumper ants, Highland Copperheads and corpses of tiny pobblebonk’s unaccountably  wedged in door jamb’s, weren’t previously part of my lived experiences…

…So I WILL preface the next part with a defence of abject ignorance.

Wandering to the far corner of the paddock to investigate, we discovered all the animals clustered about the tiny goat as he lay quietly panting on the ground. We proffered some cut up bits of apology carrot and left them all to it, committing to re-check in the morning.

Spouse had left to tinker in his man-cave, so D1 and I confined the dogs and popped down for a quick head count. While the rest of the animals had dispersed the tiny goat was not among them. We eventually found him folded in the exact spot, head bowed and covered in flies. This was not good.

After a frantic SOS to rally spouse and a fruitless attempt to coax the poor beast to stand, it was clear some form of  medical intervention was required. While my heroic husband awkwardly  lugged him across the field, I attempted to find a veterinarian open on Boxing Day.

Ringing several emergency numbers to no avail, I eventually spoke to a tired sounding country vet several towns away who agreed to meet us at her surgery.  Laying the injured goat into the back of our beaten up Suburu wagon, D1 navigated, spouse drove, and I sat twisted in the back seat trying to keep him as upright as possible. Twenty minutes later and the goat was carried in a trail of blood to where the vet stood waiting with the X-ray machine set up to go.

How old is he?

We explained that this was not our goat, that we were were his temporary, and obviously failing, guardians and could she just, you know, fix him?

The x-ray and examination revealed the leg was not broken but he’d suffered nerve damage high up in both legs. He may walk again, but it was too soon to tell and besides, it was highly likely that unless he received exemplary care, he’d die from infection anyway. Honestly? She wasn’t sounding overly optimistic.

It was the middle of the night in Austria and both our neighbour’s phones were off; in desperation I called the mother of one. She told me that both chaps adored the animals and were generally inclined to spend vast sums of money keeping them in robust health.

Ok then, so I guess we’re keeping the goat alive.

Spouse had done his part as animal paramedic, hauling the poor animal from field to car to vet to car and back again. Daubed in blood and goat urine, he was happy for me to step into the job of  administering daily intra-muscular injections, along with washing, dressing and covering the wounds with a virulent purple hued antibacterial spray.

We set up a triage pen in the garage with temporary fencing and bales of hay, settled on Gary as a suitable caprine moniker and got on with the business of keeping him animate.

Meanwhile the thorny issue of what to do about Archie hung over us like the sword of Damocles. The vet, unsentimental as she needed to be in this situation, advised that having tasted the forbidden fruit, our lovingly grateful little Kelpie cross would inevitably become a repeat offender, destined to maraud again.

Given Archie had yet to meet a fence line he couldn’t breach, there was no containing him, a fact made glaringly obvious when he began trawling the neighbourhood backyards for treasures to purloin. With a special fondness for footwear,  we had discovered half a Haviana thong, the remnants of two steel-capped work boots from two separate pairs, a mangled Nike runner and various eyelets, laces and tongue oddments waiting at the back door like proud hunting trophies.

Testing everything he met for taste and/or durability

I contacted our own veterinary practice and regaled them with the whole sordid tale. Just as the emergency vet had cautioned, they flatly assured me that given the opportunity, Archie would indeed re-offend. Livestock was prioritised in the area and he needed to be put down.

I’d only ever put down one other dog and he, while adored, had been old and ready to go. It was nonetheless a devastating experience, the recollection of which can still bring me to tears. So driving our unsuspecting rescue boy, barely a year old and the very picture of canine health, was not going to be easy. D1 accompanied me and as we sat quietly sniffling in the waiting room,  Archie lay adoringly at our feet. The receptionist asked if I wanted to stay with him or just dump and run. The very least I owed his three months of great love and even greater destruction was to stay and hold him to permanent sleep.

So I did. And it was horrible.

Back at the palliative pen, Gary seemed reasonably perky – from the waist up. While spouse hand-fed him Alpaca food and bestowed head rubs, Gary was largely distracted from my invasive medical ministrations. We mucked out his prolific waste and swatted away an increasingly growing blow fly population, reasonably confident things were going well.

Ten days later the wound had opened into a suppurating chasm of decaying flesh. The smell was indescribably bad and I wasn’t at all sure I could keep going. Fortunately, the boys arrived back two days later and our care tenure was at a merciful end –

which sadly, and despite our best efforts, turned out to be Gary’s exact fate too. 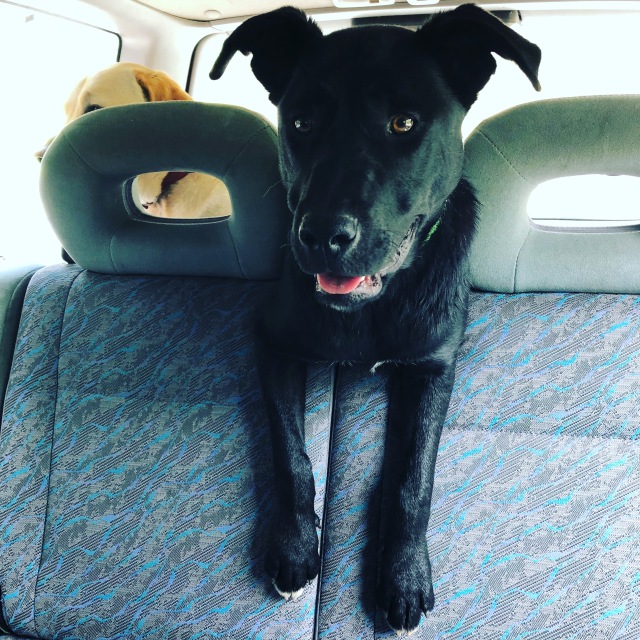 Jane is of the belief that her life's purpose may well be to serve as a warning to others. She is unsure as to why she speaks in the third person...
View all posts by Learning the hard way →
This entry was posted in Family, humor and tagged alpacas, dogs, friends, goats, housesitting, vets. Bookmark the permalink.