I confess to a level of apprehension approaching our impending holiday. Am I scared to fly? Not at all. Do I relish new experiences? Utterly. So what, I hear you ask, is the basis for my concern?

My beloved and I have a fraught holiday track record having survived holiday mishaps that would have broken a lesser bond.

The first one was about five months after we met. Lulled into a false confidence by a relatively unscathed long weekend to Halls Gap, we had decided to pool resources and book a romantic island getaway. Settling on Brampton Island due to its less-than-excited attitude to small children, we duly planned and packed. Turning my phone on when we landed in Sydney I discovered half a dozen frantic messages from my travel agent to return her call. This can’t be good, we thought.

“So, there’s this cyclone…” 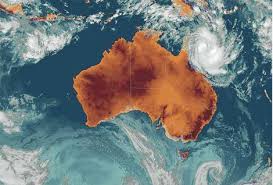 Brampton and every other adult only resort were now off limits. However, we could make it to Dunk.

“Sure, why not. We’re packed and primed.”

Dunk Island is a family resort. In a bid to further increase their market share they had advertised free accommodation for every child under five. We arrived at a tropical crèche.

I don’t dislike children. My own are quite nice and I was one once, but this was the ROMANTIC holiday. We arrived for dinner the first night and were ushered to a table next to the Walton’s. How do you keep track of that many kids? Surrounding tables were more nuclear but it felt like we were at a giant summer camp.

A particularly strong antibiotic the week before combined with a monsoonal moistness ensured I woke the next day to the most raging case of thrush I had ever had. Did I mention this was the ROMANTIC holiday? Scouring the gift shop for a handy tube of canestan proved surprisingly fruitless. A pharmacist was required and the closest one was at Mission beach which, in the absence of a private chopper, was only accessible by an infrequent ferry.

There was undeniable tension at this juncture. We both harboured private concerns about the longevity of our fledging relationship. What could help? Oh, I know, let’s go tandem kayaking!

We set off to the beach club for a brief kayaking lesson that I half listened to and my beloved ignored because he is a man and he can kayak, dammit. Paddling out we struggled to coordinate strokes for some time which meant a fair bit of circle work, but eventually with the help of an imaginary Viking at the stern, I got it. Things were going quite well and we were enjoying the views as we traversed the islands shallow perimeter. Straying a bit further out proved adventurous, but increasingly choppy water panicked me and striking out with my paddle I managed to clock my future spouse in the side of the head sending his brand new holiday sunglasses flying into the water.

I like to think a very hip and retina protected dugong benefited from our unintentional largesse. 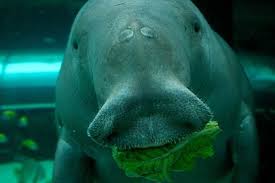 When in doubt drink. My sweetheart called to me from the stairs of the bar area but I was unable to hear what he was saying over the caterwauling of infants. I left our banana lounges and tripped lightly across the pool area in what I imagined to be a carefree and insouciant manner. I leapt gazelle like across a large patch of water slick with sunblock and goodness knows what else, but fell short and skidded across the poolside pebblemix  on one knee like an Olympic ice-skater’s big finish.

“What are you doing?” he enquires having missed the entire performance whilst tracking the progress of a flock of ibis.

The bulk of our holiday photos show us in varying stages of deterioration. Bandaged, bruised and burnt. I like to blame cyclone Hamish, but I now believe there were larger forces at play.

Two years later we had another go. We had friends in Singapore so figured we could combine a visit to them with a resort style holiday somewhere in Malaysia.  I spent hours on the internet looking up properties and eventually settled on the Langkawi Lagoon resort – a four star establishment with lovely photos. I booked a studio room at the sea village in the part of the resort that was built on stilts over the water. 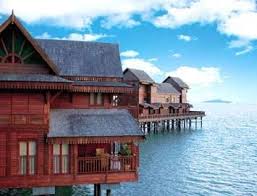 We checked in with a remarkably detached concierge who, while not exactly rude, was distinctly unwelcoming.  Milling about the lobby were several Muslim family groups. Makes sense we thought, it is after all, a Muslim country. We arrived in the middle of a torrential downpour so the various pool areas were deserted. Directed to a golf buggy we were driven to the sea village which was a lot shabbier than the on line photos suggested. Our room was appalling. Broken shower screen, filthy bathroom and the world’s most uncomfortable bed. Most objectionable of all however was THE EMPTY MINI BAR.

Determined to make the most of things we changed into swimming attire and headed for the pool bar which was a couple of wonky semi submerged stools at a deserted wade up area. Perhaps we will just read then…It took very little time for us to realise that the Langkawi Lagoon resort was a fully fledged Muslim oasis. Burkhas to the left, moustache’s to the right; we appeared to be the only Westerners in the entire place.

Another clue was the honking great poolside sign directing the women to swim in a burkhini. This is akin to swimming in your dressing gown and I had panicked flashbacks to going for my primary swimming certificate in grade 5 where you were required to dog paddle fully clothed in preparation for falling off a cruise ship. 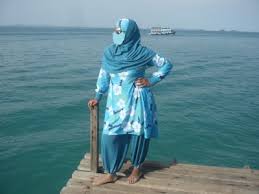 The actual beach area was a rocky spit with random patches of gritty sand. At the end of it was the beach bar. We thought a sunset drink might soothe the soul. The drinks list consisted of Tiger beer and a series of mocktails. I spied an ancient bottle of gin on a shelf at the back and requested a gin and tonic. Judging by the state of the label it had last been opened in 1958.

So there we were nursing our respective beverages as a procession of feral cats wove in and out of our legs stopping only to frequently defecate beside us.

The sunset was quite nice.

The next day we woke very early to the sounds of a construction site beside us and a note under the door advising that our room was to be fumigated for bugs today – sorry for the inconvenience.

We decided that being away from the resort as much as possible was our wisest course of action so we taxied into the main drag and hired a motor bike. The trickiest part of this exercise was finding a helmet to fit my pin head. Eventually I sported a loose helmet with a dodgy chin strap that was about as effective as a hollowed out pumpkin.  I was excited about getting out onto the roads and checking out the local colour – and monkeys. We cruised around and ended up at a resort all the way round the other end of the island. It was so beautiful I wanted to cry. Returning to our derelict sea village room that was now covered in fine white powder was torturous in the extreme. My holiday joie de vivre had all but evaporated.

The last straw was being ignored at breakfast for the second morning in a row by the coffee pouring staff even as they offered it to my partner. I exploded and demanded we find another place to stay immediately…if not sooner.

A quick bit of on-line research directed us to a place at the opposite end of the island. Having been fooled by photos before however, I was sceptical as I clambered onto the back of the bike sporting my bobble head helmet and trying to muster some positivity.

Weaving our way down the sweeping jungle driveway to the Andaman resort we cruised into the circular reception area where uniformed staff directed us to the lobby. Unlike the Langkawi Lagoon which smelt of stale food and cat shit, the fragrance of spice and tropical flowers filled the air in this oasis of serenity. My slightly manic booking enquiry and look of wild eyed desperation was fortunately overlooked as Western holiday enthusiasm and a room was found for the remainder of our trip.

The drive back seemed to take forever so anxious were we to begin our proper and deserved holiday. The girl manning reception at the Lagoon resort was as unmoved by our departure as she had been by our arrival despite the fact we had prepaid.

Later that afternoon when we had revelled in the luxury of our room and admired the accompanying ocean view, we sat in the beautiful open lounge area clutching our choice of alcoholic beverages, crunching on our bar snacks and holding hands; each of us slightly emotional with gratitude.

With these memories still fresh my need to thwart the holiday Gods and avoid a National Lampoons European vacation has insured a vaguely military approach to planning, but given its Italy… how militarily precise can it possibly be?

And now, only days before our departure to sunnier climes, my beloved is admitted to the emergency department at Royal Melbourne Hospital with kidney stones. The pain of which I was assured by each and every medical staff member, surpasses even childbirth. After enough morphine, endone and anything ending in ‘forte’, to stun an elephant his discomfort was eventually assuaged and the next day he was released under the impression the offending stones were close to passing.

Three days out and an Olympic pool sized quantity of water consumed, we are still waiting. So now our preparations also include insuring no stones remain unturned….

The holiday gods are smirking in the wings; just how benign they will be this time remains to be seen.

Jane is of the belief that her life's purpose may well be to serve as a warning to others. She is unsure as to why she speaks in the third person...
View all posts by Learning the hard way →
This entry was posted in humor, relationships, Travel and tagged Holiday, humour, relationships, travel. Bookmark the permalink.