I’m a sucker for a day spa. Give me a gift voucher with a spa menu to choose from and I’m one happy lady. I’m getting my Zen on from the moment I enter and some softly spoken, smiley young woman called Natalie or Jade asks me to fill in one of those client profile forms. I must have completed dozens of these over the years detailing my sex, age, preferred massage pressure, areas of concern and general aversion to lemon grass oil. There is always some divine aroma of neroli, lavender and sandalwood wafting about from artfully placed oil burners as I sit in my fluffy robe and ill fitting towelling scuffs, waiting for the therapist to appear and commence my ‘treatment’. Eventually a professionally dressed young woman leads me into a warm, dimly lit room. Instructed on the specifics of disrobing and lying on the massage table, she will leave me to navigate my face in the cavity that appears to have been designed around the physiognomy of a greyhound muzzle and then silently return just as I am stealing across the room to turn off my mobile phone. Eventually to the strains of Enya or sounds of the rainforest meets whale song, an hour of gentle tendering ensues – ah, bliss. 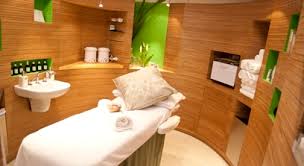 Now, let me tell you about my most recent spa experience…

My beloved and I had booked three nights at a hotel built into a cliff face along the clear waters of the Adriatic in this popular Croatian town.  Hotel More, with its vaguely euro trash decor, promised all manner of relaxation; from the unintentionally creative restaurant menu to their renown limestone cave bar, discovered during excavations, and complete with stalactites above and corresponding stalagmites below the glass floor. Cool in every sense of the word. A salty section of the sea had been roped off for guest use and any of the sun lounges not commandeered at sunrise by the Germans, were arranged to avoid as much exertion as possible.

We had both decided that a relaxation massage in the advertised “Wellness room” was warranted after the rigours of touring through Italy. Ruefully regarding my travel calloused feet I decided a pedicure would be a natural adjunct to this and set about arranging a time with the in-house therapist.

Leaving new spouse to guard our prime position sun lounges, I arrived five minutes before the appointment time and hovered about an empty reception desk. The place was silent. No sounds of the rainforest, no whale song – I coughed and a voice from above yelled out,

I was met half way by a flustered young blonde woman wearing grey marle track pants and a grubby white tee-shirt. She pointed at a chair in the corner of the room and told me to sit.

Eventually after a great deal of heavy sighing and mumbling, Nica (for that was her name), hefted an electric foot spa across the room and ordered me to immerse my feet. The water was scalding hot and I was anything but ‘relexed’ as I perched on the edge of the tub chair and tried not to wince. Nica squatted before me rocking backwards and forwards on her heels and occasionally scattering red powder into the bubbling water.

“Where you from?” she regarded me with narrowed eyes

“It’s a little longer than that actually.”

“Too far, I nefer fly further than Zagreb and I need drugs to do it!”

Clearly we were not to have the pleasure of Nica’s company on our fair shores any time soon. While we chatted she was pulling my feet out and roughly drying them on her lap. It was uncomfortably personal now. She inspected one foot closely and announced with great conviction that I had “mushroom toe”.

“Is ok, probably not your fault. You hef mushroom toe. Go to Chemist and buy crem.”

‘No, no, it’s just that I have been wearing red nail polish for ages and it stains the nail if you don’t use a base’

Nica waved her hands at me impatiently and mutinously reiterated her diagnosis. Sighing heavily she proceeded to cut my toe nails at right angles to each other and down to the quick.

‘Um, you don’t need to make them super short…I’m happy with a bit of a trim and…”

‘I hem vary good,’ she asserted confidently and then added kindly, “is ok, will grow again.”

She left me to organise some mood music. A compilation disc burned for her by a tech savvy cousin in Split blared out. Nica hummed along sporadically bellowing out a heavily accented line or two of Adele or Pink like some refugee from the Eurovision song contest with Tourettes. Returning to crouch before me she produced a scalpel handle and proceeded to unwrap and attach a new blade.

“Must cut off old skin. I tell you before, I hem vary good. Now just relex.” She shoved my shoulder back into the tub chair and gripped my foot firmly. “But don’t moof!”

Sweeping the blade across my foot I watched as sheaves of skin littered her lap.

All I could do was grit my teeth and remind myself this would be an amusing anecdote one day. When the skinning was complete, she applied a thick grey coloured paste and told me she’d be back soon.

I had enough time to read an entire UK fashion magazine from cover to cover and do half the crossword by the time she remembered I was still there. Unable to find her special slippers -“someone has stolen them”, she forced my feet into the thongs I had worn in and made me shuffle downstairs to the sauna room where she hosed the foot masque off my feet and legs.

I was fairly confident the nice relaxing massage would be as special as the pedicure and was debating whether or not to cut my losses and make a run for it, when Nica began telling me how difficult it is to get work in Dubrovnik and how much she liked her job.

So how bad can it be?

She finished daubing the scant remains of my toe nails with three or four coats of calamine pink polish and then told me to go into the ‘messarge’ room. An enormous over stuffed white vinyl table covered in butcher’s paper dominated the space and the overhead lights were bright enough to perform neurosurgery.

‘Take off clothes but leave on the underwears”, she barked. I stood uncertainly before her as she made no move to leave. An eternity later she left, but not before punching a hole through the paper over the face cavity and ordering me to “lie down on face side. I come back.”

I’d wager that Nica had never received any formal training on the therapeutic art of massage given her haphazard technique.  A squeeze here, sweeping arc there, an elbow dig, karate chop occasionally-let’s just say nothing conformed to any specific style of massage I had experienced before. All of this was punctuated by a great deal of sighing and grunting – again, I prefer my spa soundscape to be artfully atmospheric and much less phlegmy.

It was time to flip over. There was no towel held up on one side to preserve my modesty. Instead, Nica ripped off a section of paper at the end of the table and clapped it across my chest. Beginning once more at my feet, she noticed paper had stuck to the thick still tacky polish on my mutilated toenails. Displaying disproportionate rage at this beauty disaster, she flicked on the interrogatory overhead lights and arranged the table so my head and legs were both raised and I was bent like a banana. She angrily removed the offending varnish all the while muttering that my toe nails could not take polish. Nothing I said assuaged her annoyance and it was clear my Teflon toes were very much to blame.

Once more the lights were off and the massage resumed. Nica was becoming more and more agitated with my inability to relax; I was apparently making her work extremely difficult and perhaps unsurprisingly, her frequent slapping wasn’t helping. Suddenly she grabbed both my wrists and pinned my arms over my head shaking them, “Relex! Like dead person!” My uncontrollable laughter had a faintly hysterical edge to it.

The treatment was over when Nica announced, “This is enough. I stop now. You stay there for ten minutes.” I remained bent awkwardly and waited until I was sure she was back downstairs. Springing up from the table I skidded on oily feet across the tiles and flung my clothes back on. My thongs were still encrusted with dried foot masque as I padded quietly out of the room. After a suitable pause, I made my way down to the desk. Nica sniffed at me, “You should not hef messarge, can not relex. You stick with water and bubbles.”

I wondered how best to prepare my beloved for the treat that lay in store for him? Should I manage his expectations or allow him the thrill of discovery?

I lay on the sun bed and took a sip of water. ‘It won’t be the best massage you’ve ever had.’

Jane is of the belief that her life's purpose may well be to serve as a warning to others. She is unsure as to why she speaks in the third person...
View all posts by Learning the hard way →
This entry was posted in humor, Travel and tagged Dubrovnik, humour, Life, massage, pedicure, travel, vacation. Bookmark the permalink.

3 Responses to The Spa Treatment