It’s Been A Ruff Week

Archie, the newly adopted Kelpie cross, has brutally assassinated one of my Peter Alexander purple sheepskin boots a mere two days after arriving here. With the fluff lust still raging inside him, he has gone on to hunt and disembowel several soft toys and a cushion. Suffice it to say, i’m finding bits of foam and polyester fibre-fill in every corner of the house.

Monty, our incumbent canine, clearly put out by the murderous interloper, looks upon this wilful carnage with a faintly martyred air, as if to sniff, ’Tell me, who’s the good boy now??’

It seemed like a good idea at the time. The labrador was in dire need of a companion willing to spend eleventy-billion hours on the other end of a tug-o-war rope, an occupation in which we humans displayed little commitment. I’d clock his sad brown eyes peering soulfully through the fence each time I left the house, anthropomorphically imagining his palpable loneliness and being consumed by guilt.

Spouse and I had talked about adopting from a shelter, as two pedigree dogs seemed fairly selfish given the sheer number of abandoned animals in the world, but were yet to settle on a time line for doing so.

Preparing for D2’s one-way departure to Sweden last week,  I became fixated on the last minute purchase of a light weight cardigan for her to wear on the plane. Determined to spend as much time as I could subliminally whispering ‘you will come back, won’t you?’, we trawled through every retailer within a 25km radius, eventually ending up at the local Country Target. Located in the same strip of shops, was an animal shelter. We wandered in.

Now, D2 has spent the last few years working on and off at an inner city Doggy Day Care Centre and her love for dogs is rivalled only by her love for ‘The Mighty Boosh’. She was immediately complicit in my not entirely considered decision to house a furry wastrel.

Archie, or ‘Alfie’ as he’d been dubbed for the purposes of on-line profiling, was bright, alert and super waggy. We arranged a meeting between Monty the failed guide dog and this wannabe of indeterminate lineage on the morning of D2’s departure. Judged to have been a success by all concerned , we agreed that Archie join the family fold and arranged to collect him the next day.

After two days of gleeful cavorting and doggy rough-housing, Archie had begun to appropriate every bed, couch space and human lap, and Monty was giving me side-long glances heavy with judgement. 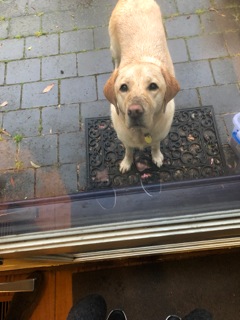 ‘So, you know, this has been fun and all, but when’s he leaving?’

A: No idea why , but it seems like the right thing to do. Problem?

me: Get down off the stairs!

A: I’m consumed with curiosity. Why do you keep disappearing up there? I must know.

me: Stop following me!

We’ve put in the call to a local dog obedience trainer. Until then, I’m A) relieved summer is nigh and the need for sheepskin boots, shredded or otherwise, is mercifully months away and 2)  I’ve been quite distracted from any maternal pining. I think that deserves a round of a-paws.

Jane is of the belief that her life's purpose may well be to serve as a warning to others. She is unsure as to why she speaks in the third person...
View all posts by Learning the hard way →
This entry was posted in Family, humor and tagged adopted dogs, dogs, humour, Life, pets, training. Bookmark the permalink.

1 Response to It’s Been A Ruff Week