It’s been a while. Not since the last ill-fated winter escape to Fiji, had I professionally denuded the pasty pins. As we hoisted ourselves from the winter couch and crawled back towards the prospective light of sunnier days, I got a bee in my bonnet about maintenance.

For no discernible reason other than feeling a bit bleurgh, I became fixated on a lady garden tidy-up and leg wax.  There was no immediate call to swim with dolphins or model lingerie, and my next pap smear was at least a year away, but the hankering for depilation persisted.

My appointment with a local beautician made, I sent spouse a text message flagging both the impending withdrawal of an unknown sum from our account and the reason for said purchase. He fired back with the optimistically clueless,

The salon owner, Grace, came highly recommended and was considered a veritable institution in the area. Much like my new thoroughly dull local dentist, I was reassured by her experience and professionalism.

So what are we doing today?

Just after some leg waxing and a bit of a bikini line tidy up, thanks.  A short back and sides?

My blank expression seemed to confirm her worst suspicions;  the all too evident hallmarks of a sporadic groomer.   Snapping into action she commanded the removal of all lower half garments and ordered me onto the operating table for an examination.

Gloved up, Grace began a forensic assessment of the offending area. Nodding and murmuring to herself she eventually settled on a game plan and began to execute it, quickly and aggressively redressing my blatant offence to the sisterhood of hairlessness.

In between the conversation cheerfully delivered through clenched teeth, there was wincing. So much wincing. From me too. She finished with the obligatory slapping application of tea-tree oil lotion and told me to get dressed.

Nether regions ablaze, I hobbled out, paid the exorbitant bill and found myself making another appointment four weeks hence.

Can’t let things get out of control like this again, can we?

My excuse for not attending a gym class the next day was the very real issue of being unable to wear pants. I may never live that down.

Spouse remained necessarily ignorant to the precise nature of my personal housekeeping for some time, due in large part to the blisters, welts, and generally angry appearance of a previously benign body part.

As I loofah away like a woman possessed, fixated on avoiding in-grown’s, while simultaneously exacerbating the raw skin, I ponder the great offence of hair. Down there hair.

Belonging to that small generation that slips between the bombastic Boomers and put-upon Gen X’ers, I can recall an era of celebratory hirsuteness.  A gentler, Nair free time, when a quick slash of the pits with a razor and bit of judicious bleaching were all that was expected.

Fortunately the next holiday will be in the midst of a European winter where I’ll be swathed entirely. Except for the week of Lappish sauna’s, but then the Nordic are infinitely more relaxed about these things than we are, aren’t they? 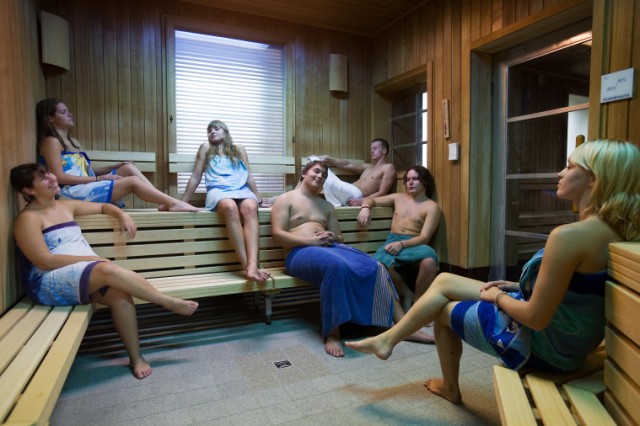 Jane is of the belief that her life's purpose may well be to serve as a warning to others. She is unsure as to why she speaks in the third person...
View all posts by Learning the hard way →
This entry was posted in humor, Travel and tagged beauty, bikini wax, depilation, humour, Life, waxing. Bookmark the permalink.

2 Responses to Wax on, wax off.