Let’s chat, you don’t have to say a word.

Posted on October 4, 2016 by Learning the hard way

I may have become that woman. She’s been waiting for me and now I’m here.

I love freelancing, I get to wander into cafes with my laptop, order a coffee and settle in for a couple of hours of free wifi. It’s the best. My favourite local haunt has teeny tables for one with barely enough room for my phone and a coffee cup, let alone my Macbook Air (gratuitous Apple plug) , notepad (I’m a digital immigrant, I note ideas on parchment. With a quill), glasses case, Kikki K diary (I know, alright… it’s up there with the abacus, shut up) and bottle of water.

Having learnt the hard way (subtle reinforcement of blog) I now make a beeline for the large communal table where folk scramble to occupy the head spot. I feel like the CEO of some multi-national organisation whenever I nab it, garbed in my magisterial looking jumper and attempt at edgy ripped jeans, spreading out the various accoutrements of my happy trade, and waving an imperious hand for more Guatemalan filter.  Good times.

I’m also an introverted extrovert, who, while requiring the energy of others to effectively function, nevertheless finds that interactions generally need to be kept to a minimum. Because people. What a bunch of bastards.

For instance,  there was the man having an animated conversation with a client on loud speaker in the cafe toilet,  who flushed, strode out into the unisex space where I was waiting to go, and walked out still talking.

HE DID NOT WASH HIS HANDS.

Back at the communal table I sit opposite a young woman reading a book. An actual book made of paper. A paperback, if you will. This, amongst all the swiping and double tapping,  warms my curmudgeonly heart. I notice she sports an enamelled pin on the floppy collar of her designer op-shop blouse. It’s the head of Frida Kahlo. 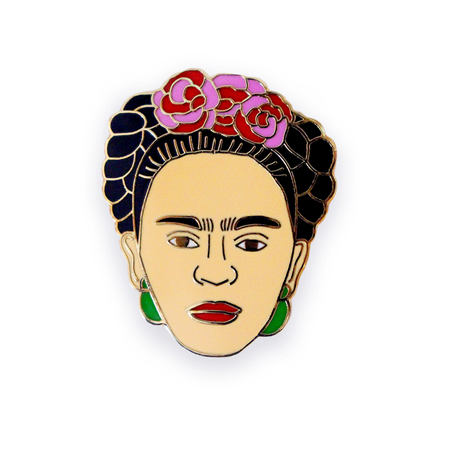 I must know from whence it came. Waiting until my burning, and possibly uncomfortable,  stare causes her to lift her eyes from the book, I say,

Nice pin. Where it’s from?

Thanks. It’s Frida Kahlo (yes, it is) it’s a Georgia Perry pin. She does a heap of celebrities, Kanye, Kim, Rihanna, Oprah…she does a great Iris Apfel one too.

Ah , yes, Iris. I’d rather like to head down that path, but I fear any attempts to pull off masses of eclectic costume jewellery at this late stage may come across as inauthentic.

Of course, I could increase the diameter of my glasses over the next couple of decades until I end up with frisbee sized lenses and vermillion frames, couldn’t I? 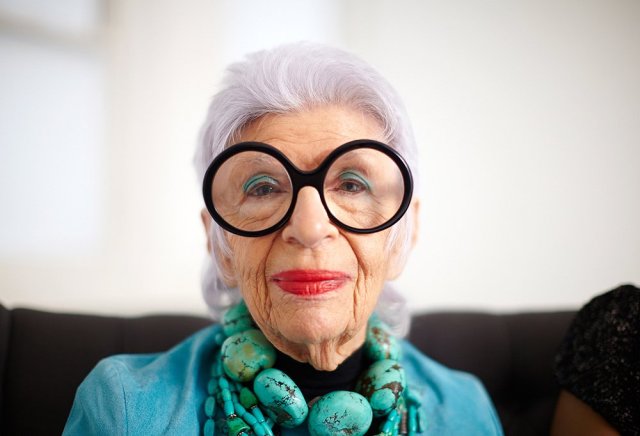 Such a fraught thing, isn’t it? Being a woman and navigating the whole ageing gracefully palaver – not that you have anything to worry about, you’re young and fabulous, and surely the Ponds Institute will have discovered some genuinely miraculous skin preserving lotion by the time you develop a crows foot?

She casts her eyes about the room now, clearly searching for some kind of intervention.

I saw the documentary, ‘Embrace’, a while back. It was all about the importance of accepting your body and not continually beating yourself up over the odd bit of extraneous belly flab or untoned triceps.

Oh, my god, that is some important shit, I fucking hate being judged…and by other women too! I blame the patriarchy…and advertising….and men….and Tinder…

I’d rattled a cage here. Best get back to me.

So, ok, I’m still high on the idea of embracing the loveliness that IS me, and ignoring decades of insecurity and poor body image, when I tune into a discussion about Invisible Woman Syndrome. The idea that we morph into ghost-like creatures, invisible to the hipster barista eye, unable to order a proscecco without bellowing at the barman, forgotten by tattooed sales assistant’s as we stand shivering in a change room waiting for the right sized pair of jeans…(*snort, like there’s ever a right sized pair of jeans) Anyway, the point is, now I’m a bit confused about what I should be focussing on – should I continue to work towards personal body acceptance or just accept that as an Invisible Woman, no one is freaking looking anyway? Does one cancel the other out?

Pin girl has closed her book and is putting on her coat. I’m not finished.

So I guess this may explain Iris Apfel.  She epitomises the woman of a certain age who has declined the invitation to slump quietly into the Jason Recliner to binge watch Miss Marple. She is the standard bearer for those women who have decided to thwart the system. Who are actively subverting the less is more rule by wearing virulently hued clothing and implausible hair colours. Who are activating entire muscle groups by hauling masses of resin jewellery about their person. Who employ a pashmina to dramatically swathe about themselves, heralding both arrival and leave taking. It all makes sense to me now. Where once I pointed in derision, I vociferously applaud. Well done to you dazzling vintage woman. Long may you reign!

She’s gone. I am absolutely talking to myself.

Now, If I could just catch the waiter’s eye….

Jane is of the belief that her life's purpose may well be to serve as a warning to others. She is unsure as to why she speaks in the third person...
View all posts by Learning the hard way →
This entry was posted in humor and tagged ageing, cafes, Coffee, conversation, fashion, freelancing, Frida Kahlo, humor, Iris Apfel, Miss Marple. Bookmark the permalink.

1 Response to Let’s chat, you don’t have to say a word.