Posted on January 7, 2013 by Learning the hard way

The thing about hand me downs is that you often find yourself wearing something you wouldn’t have actually contemplated purchasing in the first instance. I recently became the recipient of several summer frocks. I use the word ‘frock’ advisedly in that any dress composed of poplin and spattered in peony roses from Laura Ashley cannot be termed otherwise. I slipped it on and immediately craved a Pimms.

I was grateful for the largesse of my wardrobe culling friend, who was dispensing a batch of largely corporate clothing due to retirement from the workforce.

I recall an annual delivery of hand me downs from a mysterious benefactor in Western Australia that began when I was about twelve. It is one of the many great mysteries of my childhood that to this day I have no idea who they were and why they felt compelled to send (I’m assuming at great expense), their daughter’(s) cast offs to some perceived deprived southern stranger. The clothes were always several years out of date so while my contemporaries were mooching about in boob tubes, staggers and tie-dye t-shirts; I was running behind in an oversized cheesecloth kaftan.

I’m wondering whether wearing other people’s clothes in your formative years impacts any fledging notion of personal style. Would I have selected a lime green and mission brown floral maxi with burnt orange ruffles had I been given the choice at thirteen? Clearly, with the benefit of sartorial hindsight and the 80’s revelation that my colour ‘season’ was spring, the answer would have been a resounding NO WAY!

Would I also have considered a cream jumbo cord belted pants suit my ultimate teen fashion statement? Are you kidding? The inner thigh rub announced my arrival to the year eight disco a good three minutes before I was sighted. When I was fourteen I just wanted to look like everyone else, not a war correspondent.

With the exception of friends who developed quicker than me and were happy to biff across the odd pair of jeans, or the mother of a friend who was a whiz on the Bernina and would occasionally run up a second of whatever she was sewing for her daughter, these dated ensembles were the only choice beyond my pyjamas and school uniform.

Not a stellar style start.

Decades of trying to get it right followed. In my twenties I dressed like a forty year old, in my thirties it was all about floral leggings and wheaten coloured tops worn to disguise baby vomit, in my forties I alternated between a twenty year old university student and a gym junkie. While lifestyle and circumstances played a part here, it is quite clear I had no clue.

I’ve always loved the idea of having a distinct and notable personal style. One of those people whose wardrobes are variously described as effortlessly chic, classic, bohemian, tailored or monochromatic; someone who makes accessorizing look like an art form. I can tie a scarf two ways and necklaces look wrong on me. I never have the right pair of shoes – ever.

I have, however, an exceptionally stylish eldest daughter who, but for the occasional foray into dressing like a Russian prostitute, rarely puts a foot wrong. She is under the impression we are of a similar size and often suggests items from her vast wardrobe for me to try. I inevitably resemble an overstuffed bratwurst and abandon the exercise for a glass of wine in stretch pants.

My wardrobe culls are frequent and ruthless. The trouble is the giant bin bags full of ‘they-must-have-shrunk’ clothes remain ensconced in the crowded storage cupboard where I periodically forage and reinstate key pieces. I guess it’s less a cull and more a trial separation.

It would be marvelous to transcend fashion altogether, to dress entirely for size, temperature and modesty. Imagine ignoring the siren call of magazines, shop windows and celebrity red carpets?

I think it may be time to consider describing my personal style as haphazard, accidental and occasionally borrowed. The upside of getting older is I can also go with aging eccentric, which could prove enormously fun and probably quite comfortable. 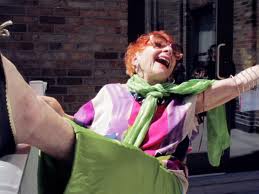 Jane is of the belief that her life's purpose may well be to serve as a warning to others. She is unsure as to why she speaks in the third person...
View all posts by Learning the hard way →
This entry was posted in humor and tagged Clothing, fashion, hand me downs, Home, humor, Laura Ashley, personal style, Pimms, Shopping, Tie-dye, Western Australia. Bookmark the permalink.