The Cabin in the woods – part 2

Posted on September 6, 2013 by Learning the hard way

My youngest daughter, D2, had returned for a second tenure working at a summer camp in Massachusetts. She had spent the previous American summer there and had fallen in love with the culture, the location and one of the senior staff.

Returning home for another summer in Australia she spent the ensuing months miserably willing away time before returning to the States. It was not a happy period for her or for anyone who cared about her.

Meanwhile, having rejected the delights of celebrating a milestone birthday with an extravagant party, spouse suggested we flee the country and visit D2 instead.

In my infinite wisdom, for that is what one garners after 50 years on the planet, I decided that along with beloved spouse, it would be divinely wonderful to have my eldest daughter, D1, accompany us.

No one is buying the infinite wisdom line anymore.

So there we were, three of us excitedly heading over to America – land of the free, home of the brave and spiritual home of junk food. A fact never more amply exemplified than by a segment we watched in New York on morning television – which, by the way, is the same all over the world; a smarmy anchorman, a couple of interchangeable blondes and a whacky weather guy who reports rain while zip lining. So the hosts were talking about the ‘cronut’; a cream filled croissant / donut hybrid (and we wonder at French ambivalence, mon dieu!) invented in New York.

Explaining that the Dominique Ansell bakery produces just 200 cronuts a day, our perky morning show blonde produces one for the camera. Apparently wannabe diabetics queue for hours before the bakery opens for the opportunity to purchase no more than two of the sugary delights and their limited availability has ensured a tidy blackmarket with people paying up to $40 a pop for each $5 pastry. That’s a month supply of Modafinil for your average Wall Street venture capitalist. NUTS!

It was clear when it came time to sample this foodie equivalent of the one hit wonder, that blondie would rather handle plutonium. She regarded the cronut with vague terror as if all 400 calories were ready to jump straight onto her skeletal hips.  Our alpha male harboured no such reservations and bit into the calorific delight with the kind of enthusiasm you’d expect from someone who’d been at work since 4am.

Where was I? Oh yes, making our way across to see D2 in her new natural habitat – the wilds of Massachusetts and home of Bo Burnham, a fact that I’m guessing she doesn’t know but will after reading this blog post. Always educating.

So we have navigated our way to Granville’s Shabby chic cabin in the woods https://jane63.com/2013/08/30/the-cabin-in-the-woods-part-one/and survived the night – barely.

Good afternoon. I am a representative of The Church of Jesus Christ of Latter-day Saints. I would like to share a successful family program with you and your family, without any obligation on your part, and with nothing to buy. May I come in for a moment?

The following day was spent in drowsy contemplation of the local area while we waited for visiting instructions from D2. We noted that every house sported some form of patriotic decoration with several homes appearing to compete over the size of their flags and the sheer amount of bunting festooning their porches.

While it’s entirely possible the ante was raised to observe the fourth of July I can’t help suspecting this is a permanent display of nationalistic fervor.  I’m uneasy about overt symbols of patriotism.  Inevitably the Southern Cross decal on the back of a V-8 in the outer suburbs of Melbourne or Sydney belongs to someone who also sports a “Fuck off, we’re full” sticker plastered across their bumper. 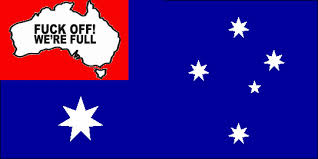 The highlight for all of us was discovering Wi-Fi at a Laundromat in the next town.  We passed a pleasant hour of clothes washing, tumble-drying and Facebooking. D1 was simultaneously overjoyed and incredulous that she had passed her recent Economics exam while spouse pored over real estate magazines. He marveled aloud at the bargain basement prices and wondered if we could relocate.

Feeling like a spy waiting for details of the next mission I logged into my emails to finally receive information about visiting D2.

She had instructed us to arrive at exactly 5pm. We were to head directly to the office and under no circumstances wander about on our own as the children would be extremely alarmed to see strangers. This seemed a tad melodramatic, as we are fairly benign looking people favouring, for my part anyway, handbags over handguns. But rules were rules.

Camp Chimney Corners sprawls rustically across an idyllic slice of the Berkshires in Massachusetts. Surrounded by massive fir trees the camp site is dotted over with wee log cabins entirely reminiscent of the Parent Trap – I half expected Lindsey Lohan to run out yelling ‘I have a brilliant beyond brilliant idea!’ (Which we all agree now is, Linds, back away from the crack)

We duly arrived at 5pm on a sticky Tuesday afternoon and presented ourselves at the office.

An excitable pony tailed staffer radioed our presence into her walkie-talkie.

Eventually my darling girl appeared around the corner of the administration block all tanned and blonde and fairly bursting with health. After squeals and hugs all round she took us on a whistle-stop tour stopping to introduce us to every co-counsellor, administrative staff member, camper and animal we encountered along the way.  We wound up at a cabin where her adorable young charges had lined up, a la Von Trapp, to meet us.

Sonia “How did you learn to speak American so good?”

D2 “Now Sonia, just have a think about that question for a minute.”

Sonia (thinking) “How did you learn to speak American so well?” (Sonia is quite pleased with herself here)

D2 “I want you to really think about the question you’re asking me.”

Sonia (Pauses. Revelatory expression) “How did you UN-learn Australian so well?”

Sonia wasn’t the only one who wondered aloud if we spoke English. I’m thinking less canoeing and more global awareness. 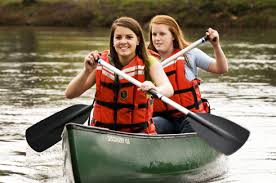 Well as if anyone doesn’t know that the capital of Tuvalu is Funafuti?!

Finally we were able to leave and whisk D2 away for dinner. In the car she announced that her girlfriend would be joining us. There was some grumbling dissent from D1 who would have preferred to have her sister to herself, but we all agreed that as there was the potential for awkwardness, we best jump straight (if you’ll pardon the expression) to the introductions.

“Is she nervous about meeting us?” I asked D2

“Hell yes! She wanted to know if she should cover up her tatts”

Walking into the tapas bar I immediately recognized D2’s girlfriend from photos as she stood up and smiled uncertainly. I embraced her without finding out if she was a hugger first. D1 and spouse followed suit. D2 sat beside her and darted anxious looks across the table at us all.

“DON’T EMBARRASS ME!” she yelled, telepathically.

There were few opportunities to have a conversation let alone embarrass anyone as the regular Tuesday night open mike began.

So much enthusiasm, so very little talent.

After a succession of tuneless vocalists, a woman with a violin entered the restaurant, set up a small video recorder and proceeded to impersonate a conflagrant cat.

With the benefit of hindsight, this may have been a cunning ploy on behalf of my child to avoid any errant conversational gaffes. Kudos to her, it worked well.

D2 had agreed to spend the entire following day with us. D1 insisted on breakfast at a real American diner. She seemed genuinely surprised that it had no juke box or louche young men sitting in booths with girls in twin sets.

In belated honour of my birthday, both girls were paying for dinner at place that D2 had described with the kind of hype reserved for Spain’s El Celler de Can Roca and its dancing icecream.

When the dance floor meets your plate

The Dreamaway Lodge is a remote restaurant in the backwoods of New England on the edge of the state forest. Originally a brothel and speakeasy, the place has become the stuff of legends due to the likes of Bob Dylan, Joan Baez, Allen Ginsberg and Arlo Guthrie having visited. A folksy joint with the type of retro kitsch sensibility that appeals to hipsters and boomers alike, it was here that my songbird daughter had performed to an enthusiastic local crowd accompanied by her girlfriend on guitar – The Dreamaway was less a venue and more a romance.

Dinner however, was a tense affair due, in no small measure, to our futile attempts to circumvent the underage drinking policy. D2 is twenty and had been enjoying a civilized Shiraz with her frequently quaffing family in Australia for a couple of years. The sudden prohibition served to highlight in a particularly public manner, the age disparity between my daughter and her girlfriend.

Wandering out onto the verandah afterwards spouse and I decided to explore the gardens while D1 happily melded into the various groups of young camp counselors knocking back beers and cider around the fire pit.

We sat on wrought iron chairs in a fairy lit grotto and noted how D2’s vibe was becoming increasingly resentful. It was screamingly obvious that having her two worlds collide at this time was not what she wanted.

I found my youngest child standing alone observing her girlfriend drinking and laughing at the centre of a large group. I took the opportunity to ask her to accompany me on a tour of the fabled maze. She had very little to say and strode ahead of me through the hedgerow. Eventually she stopped and we stood together silently watching the flicker of fireflies.

It was clearly time for me to leave her.

It took a while to locate D1 who had disappeared into the crowd. Eventually she wended her way back to us slightly stoned and very happy with her new acquaintances – especially the dude with the weed.

I left feeling regret and relief in equal measure.

Jane is of the belief that her life's purpose may well be to serve as a warning to others. She is unsure as to why she speaks in the third person...
View all posts by Learning the hard way →
This entry was posted in Family, humor, Travel and tagged australia, Berkshires, Bo Burnham, facebook, family, humor, Massachusetts, New York, travel, United States. Bookmark the permalink.